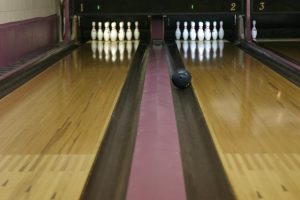 I’ve been bowling since I was a little girl. Both my parents bowled so I guess people could say I grew up around it. The sport of bowling is a challenge all on its own, it isn’t as easy as it seems, like most people think. Some believe it’s just a game, where they throw a ball down the lane. It’s much more than that. It’s a competitive sport.

While walking into the bowling alley, I can smell the fresh oil on the lanes and the aroma of food from the snack bar. Pins shine under the luminous lights almost as if they were glowing before one’s very eyes. The approach is like runway, only without the models.

Picking up my green and silver Spit Fire bowling ball, waiting until total focus sets in. It’s game of strategy, a waiting game. Just don’t wait too long. Walking down the approach feels like gliding, describing it any other way is an injustice depending on whose speaking of their experiences.

Throwing the Spit Fire down the second arrow, curving a sharp left, it happens so fast, most of the time. The ball strikes, striking hard can help in the long run. Achieving a good pin count on every frame is of the upmost importance. Having fun is fun and all but if one’s truly serious about it. That’s only a fragment of the entirety of the matter when it comes down to it.

Been bowling since I was four years of age, so taking this seriously is no problem when I think about it, sure I want to have fun and all but it’s a competitive sport, winning can be fun as well. Keep in mind though, winning isn’t everything but it’s still great when it happens. My favorite part of bowling is when I can bowl in a league whether for summer or winter seasons and bowl alongside a team.

It’s not just my score anymore, three others scores are taken into account in a total series and total pin count, depicting one’s standing. Over the years I’ve heard some pretty quirky names for team but that’s part of the fun and joy it brings. Matches can be intense, when they must come together in a unified group to try and overcome the opposing team.

Sometimes all the fall down, those are the best, strikes they’re called. Spares however are just as important. And if one throws certain games, such as an all strike and spare every other frame it’s called a Dutch Game and a prize is won aside from having a clean game. Lucky breaks leaves pins scattered and if one’s truly has luck and the bowling gods on their side, the pins will fall into each other like dominoes.

On a team if they’re close enough, teammates can be like a second family to one another. Bowling can be an exciting sport to play. One thing I can’t stand is when people go on the approach and fool around, that’s a challenge all on its own. Especially when they bowl right next to a more serious bowler who actually gives a darn, frustrating as heck.

There are many things to consider when bowling: where your mark is, adjusting if you miss the mark or the oil patterns don’t help your shot, spares whether they are single pin or multiple shots, how to make them, good sportsmanship, common courtesy… I could go on.  Some don’t care how they bowl, throwing the ball anywhere. Like they are throwing it away, who does that, none that I know. They strive to get better not get worse.

Bowling is a sport people, believe it or not. For those who do take it seriously, when they have an off day, they get frustrated. It affects their attempts of getting a good pin count most of the time however in some cases it can help depending on lane conditions, though bowling with a level head is better.

Cheering helps too, just not too much where one cannot focus on the frame they’re on, show common courtesy and honor good sportsmanship. I’ve learned about teamwork, focus, determination, and to have a great time while bowling. When I step into a bowling alley, bowling in the next match and spending time with some good friends, is something to look forward to.

« The Round House by Louise Erdrich
VEGAS VALLEY BOOK FESTIVAL 2014 »