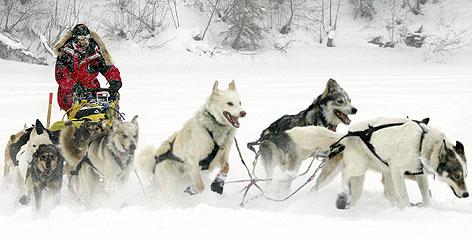 Alaska. What a wild, vast country. Like a huge, baby bird, with it’s mouth always open, head back, waiting for one with offerings to come, and then to give itself to it completely, then more, never enough, this hungry country swallows me, and I give myself willingly to its insatiable appetite.

Open, wide-open, empty, and yet so full.

When we made it to Cripple, I felt like I could leap over the grand canyon. I felt like a Superman, and my trusty companions were Super-dogs, every one. Instead I wrote my name in the fresh powder, leaving my mark while my Super-dogs did the same. We were making good time, and as far as I could tell, we weren’t last. I didn’t really care. Even if we made it into Nome days later than the rest, making it all the way would be enough for me.

All the jokes and doubts had been running through my mind every since we left Anchorage, days before, playing over and over again in my head. Then Mojo, my favorite dog, started to limp this morning, bringing more doubts. Mojo, now begrudgingly riding in the sled until I can drop him at the next checkpoint, to have him properly attended to, is clearly insulted to be treated this way, and lets me know. Dogs have an amazing repertoire of sounds to express their feelings. Mojo is huffing, snorting, whining, booping, barking, hissing and the occaional harumph. Even in pain, he longs to pull, run, to lead. He has taught me well what it takes to be a true champion.

I like the power I feel standing on the runners, commanding my fur-faced crew, but I’m colder than I have ever been in my life. I think about squeezing into the small sled with Mojo, where his body, like a big fur glove, would warm me. But I know Mojo would never willingly sit out a race, so neither will I.

No,  I will not give in to the cold, and those thoughts, the ones that have dogged me since Anchorage. They keep coming at me, the jeers and laughter, like a fast forwarded film, and along with the white world flashing past my sled, I reel under the dizzying effect of it all. Most of the time, I just hold on. The dogs are sure, when I am not.

“You’re a Silicon Valley Geek Freak Ben, you wouldn’t make it a day in Alaska on a cruise ship without your laptop and trusty blackberry as companions. Do you really think you can survive two weeks in the Alaskan wilderness with twelve dogs and no communications devices?”

Ok, I admit it, I’d rather go to the Tech Museum than to a ball game, or explore a volcano instead of hang-gliding. Sports were never my thing. I’m just not wired that way. Three years ago, I looked back at my life and saw great achievements, but I saw no real risk. I had never set out to do a physical thing, just because. I had never been “sport” enough to accept the challenge of a sport.

I thought, “In three years I’ll turn fifty, if I’m ever going to go out for a sport, maybe I’d best get to it.”

I decided not to pass the half way mark in my life without having ever once participated in a competitive sport.

For the next six months I checked out the possibilities. I looked up everything about baseball, football, soccer, hockey, hunting, and a half dozen other American past times. Nothing captured my interest. I couldn’t understand, why would anyone follow a little ball around and try to put it in a hole, or put themselves in a position to have a huge guy hit them with brute force, all in the name of moving a football a few feet.

Just when I thought the only contest I might be willing to enter would be a spitting contest, I read an article about the yearly Iditarod race in Alaska. Man against the wilderness with only his dogs as companions. I had found my sport.

I took a two-year leave of absence from my job, and spent the next twenty-three months in Alaska. I found qualified instructors willing to teach me. I worked everyday with the dogs. I almost lived with them.  I made several trial runs and did well. Now, here I am, peeing in Cripple, almost half way to the end.

I signed in at the checkpoint, fed and watered the dogs, and after making the necessary arrangements for Mojo to be sent home, and thanking him most sincerely for the kindness and patience he’d had with this greenhorn city slicker, we set out again.

Leaving the safety of the checkpoint behind, to the yelps and cries of abandonment or encouragement from Mojo, maybe a bit of both, we headed out into the white open country that had captured my heart.

“Mush! Let’s go!” They shot forward like a bullet, eager to see what would be around the next bend. I urged them, “Faster, faster.”  Then, the icy wind tearing at my face, my heart pounding, and my head so clear, I could feel the Earth turning, and I realized I was in no hurry.

I am competing and I have won, simply because, I am here. I knew in that moment of clarity, I will cross under the Burled Arch, the finish line in Nome, I may not even come in last. But until I get there I will be here, fully. I am having the time of my life and we (me and the fur-faces) have a lot of snow to write in along the way. What a day, what a sport.

« Self Editing for Fiction Writers
Excerpts from Erotica Writer's Group. »