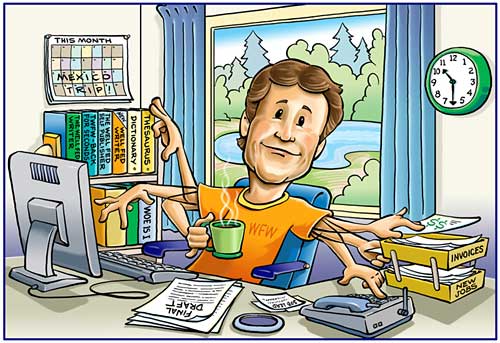 Turning One Self-Published Book Into a Full-Time Living

Keys: Excellence, Creative Promotion and Going “Beyond the Book”!

It hit me in 2002, a few years after releasing my first self-published title (The Well-Fed Writer): That book had given me a full-time living with a year of its release. It’s now 2014, and my now-five titles (and book-related products and services) have done the same – now since 2001.

Definition of “a full-time living”? While I’m not picking out chateaux in the South of France, they’ve paid all my bills, financed the one or two printings I do most years, allowed me continue to save for retirement, incur no new debt, and take a couple of nice vacations each year. I’m guessing that (or even half that…) would work for most people.

So what are the keys? Well, here are a few of the things I’ll be discussing in more detail in my two sessions at the LVWC in April…

Sounds cliché, right? Well, yes, but for a reason—because it works. Make your goal to create a book that’s the best (ideally) or one of the best books on the subject. Make it as good as it can possibly be, and in as many ways as possible—i.e., readability, editing, topical subject matter, practical detail, and production value.

Do all that, and you’ll have given that book THE best chance of commercially succeeding of anything else you can do – including the book’s marketing. Yes, you read that right. And we’ll discuss all the how-to detail at my conference sessions.

Here’s the truth (that no one wants to hear): If you’re a first-time author, or even worse, a first-time author of a niche book, by and large, the mainstream media doesn’t care about you. They just don’t. But, unlike how things were, say, 20 years ago, you’ll have far more success taking a more grass-roots Internet-based approach to promotion than to try to hit up traditional media outlets for exposure. And it’s far easier to do that today—and zero in on your target audience(s) with laser precision—than it’s ever been. And we’ll talk about all that in April.

Going “Beyond the Book”

Man doesn’t live by books alone. Well, maybe a handful of best-selling novelists might, but most of the rest of us mere mortals should count on parlaying our “best-in-class” (right?) book into multiple directions, each with their own potential income stream. Things like additional books, ebooks (in many iterations and stripes), blogs, ezines, coaching, speaking and teleclasses (and more) are all avenues I’ve tapped successfully. And I’ll spill all the beans.

Hope to see you there!

Can’t land a publisher? Make more money without one! Check out www.wellfedsp.com, from Peter Bowerman, veteran commercial writer and the self-published author of the three award-winning Well-Fed Writer titles (www.wellfedwriter.com), how-to “standards” on lucrative “commercial” freelancing. He chronicled his self-publishing success (now, 70,000 copies of his books in print and a full-time living since 2001) in the award-winning 2007 release (and its 2014 revised edition), The Well-Fed Self-Publisher: How to Turn One Book into a Full-Time Living.

Peter will be delivering two talks at the LVWC in April:

“Self-Publishing Demystified: Taking the Reins of Your Own Publishing Journey” (55 minutes); and “Building Your Own Writing/Publishing Empire: Strategies for Turning One Book into a Full-Time Living” (85 minutes).