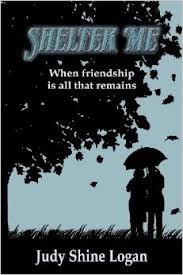 Shelter Me grew out of two pivotal experiences in my life: working in a psychiatric department for a community hospital, and hearing my grandmother cry over my deceased grandfather.

In the late 1980s and the early 1990s I was the Coordinator of Administrative Services in the department of psychiatry at Boston Regional Medical Center, where we had nine units ranging from psychological testing to inpatient and outpatient services.

Working with the administrative staff in all the units, I saw many women and children being treated for abuse, most of it physical but also much of it insidiously emotional, too.

Sometimes women were hospitalized on the inpatient unit because returning home was unsafe and not an option or because there was no room at one of the handful of shelters back then.

Likewise, abused and violated children were treated in the outpatient practices and the inpatient locked children’s unit when their behavior posed threats to themselves and others.  The unit locks were meant to keep the children in, but often to keep out their abusers.

Though the work was fulfilling, it was also terrifying, and my heart ached for these hurting women and children. At the end of the day, the only way I could exorcise their faces and stories was to write about them fictionally, and so began my novel.

At the same time, my sister was a Deputy Sheriff in Florida and often called me crying over the Domestic Violence calls she responded to and the lack of laws to help victims or to prosecute domestic violence.  Trouble in the home was nobody’s business and nobody wanted to change the status quo, so thousands and thousands of women and children were beaten, violated and sometimes killed in the name of “family business”.

Almost simultaneously, I had a conversation with my wonderful, stoic, old Irish grandmother who often said she literally raised her seven children on her knees.

When her husband died unexpectedly at age 42, my grandmother, with no education had to work nights scrubbing floors in the big, old Boston office buildings to support her seven children.

Each morning, she stopped and went to Mass before heading home to take care of her children.

One day, I asked Grandma about her husband, my grandfather Daniel, whom I’d never met.

She related this story: “I was coming home from Boston on the train and had to wait in Harvard Square for the bus.  It was sunny and pleasant so I sat on the bench, and for a single second I thought ‘Oh, maybe I’ll see Danny!’  That’s when I realized he’d been dead ten years, already.”

She burst into tears and cried for several minutes.  I was speechless. I’d never heard her cry, but the pain of that loss and the emptiness of the intervening years had weighed on her and broken her spirit that moment.  Of course, she recovered but for the next 46 years, she never dated or did anything outside the scope of her family or its needs.

After my conversation with Grandma, I began to think about the differences between the battered women I saw daily at the hospital and my grandmother who loved, but lost her husband early; that’s when Shelter Me became a theme and then a novel.

Last year, I attended a 46-hour training program to become a Battered Women’s Advocate and briefly volunteered in a women’s shelter.  It was heart-breaking to be so close to such tragedy and pain.

I hope that Shelter Me presents some of the dynamics of domestic violence – how it feeds itself by consuming its victims live only to regurgitate them for another meal, and how it impacts love, loss, violence and abuse for all involved.

May it help women recognize abuse and provide them with a belief in escape and recovery.

I dedicate this book to all grieving women – those who had a good love, and those still waiting for one.