This last Monday John Williams of “Let’s Talk Nevada” came to speak to our group. Their website began when a handful of Mesquite residents decided to fund an online forum promoting free speech.  The site is a place for an expression of opinion, any opinion— from discussions about water rights and city management to veterans sharing stories about Vietnam.

When one of our writers asked if it would be appropriate to post about their writing on the site (i.e. I can promote myself for free? Get published online for free?), John responded:

“Remember who we are. There’s nothing inappropriate… as long as it doesn’t get us sued.”

*Articles should be relatively short, say under 500 words (if it’s over a thousand words, it should be split into a series of posts.)

*Weekdays tend to be more issue-centric, but on weekends the site features posts that are more author-centric. Each Sunday they run short stories by local authors. Yippee!

From the initial Mesquite site, the website has branched out to the entire state of Nevada. Henderson just got it’s own site, and they’re looking for local writers to post local material. If you’ve ever dreamed of writing your own column, here’s your chance.

If you haven’t already checked out their site, click on over to letstalknevada.com and subscribe. Start communicating with your own community through this great online forum.

Don’t forget to RSVP about our upcoming Holiday party at Tina’s house on December 16th. Email Tina at christina [at] bajabrody [dot] com.

SelfPubBookCovers has donated a cover for the raffle at our conference.

Congratulations to Judy Logan on the release of her book, Shelter Me, when friendship is all that remains. Heres a link to the page on amazon.

Congratulations to Gayle Nathan on the success of her family court video.

Congratulations to Ed Fuentes on receiving an Andy Warhol Grant to establish a blog.

Quote of the Night:

“I feel like half my body’s missing without the internet.”

“When wrapping up the ending of your story, don’t forget to let the reader in on the changes and growth of your main character. Did he/she reach his/her goal? Has the story changed his/her emotional makeup? This is especially important in a coming of age story or one built around emotional upheaval.” 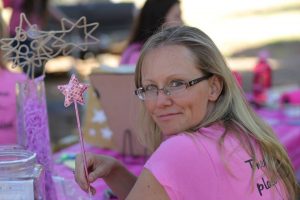 You started writing just a couple years ago. What was it that got you started? Had you planned to be a writer?

I read the entire Twilight series in five days–I couldn’t put them down. About two weeks later my main character, December started waking me up between 2-4 a.m. insisting I write her story. Before that moment I had never considered being a writer. I had considered writing a autobiography, but that was mostly just suppose to be for my kids. Because of learning disabilities I’d never considered myself capable of writing a book. Even while I was writing the first draft I got up just to get December to leave me alone. I never really thought it would turn into a whole book and I’m even more surprised that it’s turned into a career/lifestyle that fulfills me. The moment I finished the first draft I considered throwing it in the trash, but a comment my dad made a few weeks previously came to mind. He said, “You’re a better writer than I am.” My dad is the smartest person I know (I have never asked him a question he didn’t know the answer to) and he has written and published a dozen books.

Tell me about your writing process.

I’m a pantser, I write when and how I’m inspired to write. However, I am learning how to plot–I think it’s a more effective way. My husband had taken the writing journey with me and I LOVE when I can read parts of my book to him and he’ll stop me to  say, “he’d never say it like that.” or “what is the motivation here?” We as writer’s have to have other’s that know our books almost as intimately as we do to bounce ideas off of.

What have been some of your most valuable resources in learning about the craft of writing?

The most valuable resources have been other writers. For two years I turned to family and friends begging for help to fix my book. They did the best the could, and I appreciate each one, however, I received 100X more help in six months from fellow writers than I did from those outside the writing world. The HWG set me on the right path and my critic group of the most amazing five women push me every day to learn and improve, while showing me how.

When you’re not writing what do you do for fun?

I love almost everything outside–thus why I love living in Las Vegas. I enjoy biking, hiking, swimming (no running–I’d rather be tortured), skiing, and skating. I also love to read. In second grade I couldn’t read because I am dyslexic. The school offered prizes for every 50 books you read and a trophy for the child that read the most books that year. I’m competitive so I decided I wanted to win. I read over 800 books that year and won the trophy.

That’s a great story! I’m impressed. Does dyslexia affect your reading currently, or did the 800 books in second grade cure it?

I wasn’t cured of dyslexia in second grade, but I turned into a bookworm after that which improved my ability to not switch letters. I still struggled with numbers. This past year I’ve started a nutritional program and have not mixed up my letters or numbers at all…I think my brain just works better when it gets what it needs.

What are some of your favorite books or authors?

I love to read almost everything. I’m a classic girl. I love Jane Austin, CS Lewis, and Emily Dickinson. Nicholas Sparks is a genius at romance. I enjoy Dan Brown and Stephanie Meyer.
I’m also a sucker for biographies and non-fiction history books. I love to prove to myself that a quote my dad said in the first college class I took from him is true: “Every person who has or will ever live are more alike than they will ever be different.”
Those are words of wisdom. I also believe that our common humanity means more than our differences. Thanks for the interview Angelina!

Our next weekly meeting is Monday, December 2nd, at the Coffee House in Henderson. Wednesday December 4th is the screenwriting meeting. The discussion will start with “Dog Day Afternoon,” so watch it if you haven’t already seen it. By the way, the movie has an outstanding pitch:

Doesn’t that do what any great pitch should do? It makes us say “tell me more!”