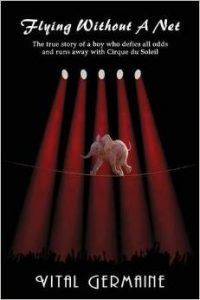 One woman’s review of one extraordinary man’s exceptional memoir.

FLYING WITHOUT A NET by, Vital Germaine.

Recently released, Vital Germaines memoir, Flying without a net, flew right into my heart and there remains, warming my soul.

Flying Without A Net “The true story of a boy who defies all odds and runs away with Cirque du Soleil” lays the author’s truth bare and allows the world to see his boo-boos, along with his amazing strength and beauty.

In Cirque du Soleil, Vital preformed gallantly through the pain. The pain of a childhood lost, no, more devastated than lost, as well as physical pain.

His greatest accomplishment may be that through his childhood, his manhood, and thousands of performances in the air, he did not quit. Vital never gave up. He was determined to fly, with or without a net.

Born in 1964 to an African mother and a Caucasian father, Vital’s life started amidst a raging civil war in the Belgium Congo. His family managed to escape when Vital was six months old. They later settled in London where his mother, a talented woman, took a job at the New Congolese Consulate. Instead of being proud of his wife, Vital’s father begrudged her success and became increasing jealous and controlling. Eventually dad ended up in jail and his mom’s drinking escalated. Vital and his siblings were lost children, abandoned and brokenhearted.

Vital held onto hope longer the rest. He was sure he would soon be reunited with his mom, whom he adored, he told himself that the seventies would be better than the sixties. Sadly there would be no family reunion, instead young Vital was placed in a home for children.

Vital excelled in school and made friends but continued to long for his mother, his family, his life. After several years in different homes, he’s shocked when his long gone father comes for him and hopeful that his chaotic life might be about to change for the better.

Instead, the years with his father and his father’s new family prove to be the most challenging years of this young man’s life. The years with his abusive father were life changing, filled with lies, racism and sad sick behavior.

Still, Vital Germaine held on and did not give up. Yes, he ended up, in the circus, but, truth be known, he was born into one. Cirque du Soleil gave Vital worth and the family he so desired and deserved.

Now, he gives a piece of his huge and courageous heart to each of us who read Flying Without A Net.” I realized after I sat my copy of Vital’s memoir down, having gluttonously devoured every page, every word, that as long as we don’t give up, as long as we hold onto hope, we are never without a net.

Hope is our net.

Thanks Vital for teaching me this life changing lesson. Now, Fly!

Toni Pacini – Albama Blue, you can find her at lifewriteon.com

Flying Without a Net on Amazon